Nasa principals Raila Odinga and Musalia Mudavadi during a past rally at Mama Ngina grounds. Image/COURTESY

ODM leader Raila Odinga’s signals that he is preparing to run for President in the 2022 General Election has caused disquiet in the Nasa coalition.

While the former Prime Minister is yet to openly declare whether he will vie, his recent moves after the March 9, 2018 handshake with President Uhuru Kenyatta have made his competitors mark him out as a potential candidate.

Yesterday, Wiper and ANC tore into Raila saying after four barren trials for the top seat it would not be tenable for him to give it another stab.

Wiper executive director Jared Siso in an interview with the Star said as a party , they are aware that Raila is laying ground to run, warning that as long as the Nasa memorandum still exists the ODM chief will have no option but to support Kalonzo.

Siso said Wiper is currently re-branding and strengthening its structures ahead of 2022, saying his party is supporting the handshake for the sake of peace.

“We know we will have another political realignment but certainly from our end it doesn’t include any intention whatsoever to support Raila for 2022. 2022 is still far but we have to plan for it,” he said.

He added: “As a party we are aware that Raila has something up his sleeve but even our party leader believes that we had a pact which we deposited with the Registrar of Political Parties.”

He said the former Vice President who supported Raila in the 2013 and 2017 will never again back a Raila candidature.

“It will be the height of dishonesty after twice promising to support another candidate to create another way to make a comeback but as we see it, I don’t think Raila has any intention not to support Kalonzo come 2022. What is happening could be pressure from his sycophants,” he said.

Former Machakos senator Johnson Muthama who co-chairs the Nasa management committee said if Raila intends to run on the coalition ticket, then they will have to sit to deliberate on the matter. 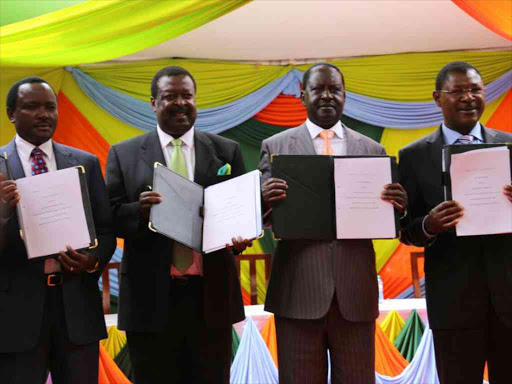 “If the presidency will be sought through Nasa , then we will have to revisit the memorandum we had in 2017. But if not, Raila is free to plan, declare and run for any seat just as the other leaders will also do,” he added.

ANC boss Mudavadi, the brains behind Nasa, said Raila has a democratic right to run in 2022.

He said he has chosen not to join government saying failing to form government, their role was to stop corruption, reform IEBC and ensure good leadership.

“We must stop this hypocrisy that you can be in government and opposition at the same time. Chose one. I refused a government job so that I keep the government on toes,” he told the Star.

He said “we must not live in a society where a Constitution must be amended after every election”.

“I am in Nasa. Our supporters are questioning our activities and we must be held accountable. We have to push for what is at stake for Kenyans.”

However while reacting  to media stories indicating that he will run in 2022, Raila did not deny if his name will be in the presidential ballot in 2022 only saying it was too early.

“Hon Raila Odinga strongly objects to reports appearing in the Sunday Nation today that put him in a presidential race he has not declared any interest in and which does not exist currently,” Raila’s spokesman Dennis Onyago said yesterday in a press statement.

Onyango said the media deliberately twisted Raila’s calls for his party ODM to prepare for grassroots elections to mean he is in the presidential race.

“Raila Odinga does not believe that three years into an election expected in 2022, who is running, who is ahead, who is behind, who is going to win, what are the odds and who will lose is the priority the press should force Kenyans to occupy themselves with,” he said.

He said it was irresponsible and reckless for the media instead of focusing on urgent economic and social issues that the country should address before 2022, they are concentrating on the 2022 politics.

“Mr Odinga entered no race yesterday and he knows no race that is on as reported in Sunday Nation. It’s way too early,” he added.

In Meru county, a section of Jubilee MPs from Mt Kenya who had accompanied Deputy President William Ruto warned  that JP would face problems in 2022  if it does not put its house in order.

They said Jubilee was being duped by  Raila  that he was not playing politics when in fact he had asked his party to prepare for grassroots elections in preparation for the 2022 race.

They said it was time Jubilee readied itself for the 2022 contest.

The MPs said ODM was putting its house in order ahead of the elections while duping Jubilee with the handshake.

Linturi and Gachagua said it was time Jubilee woke up to the fact that other parties were preparing themselves, saying Raila  was cunningly using the handshake to marshal his party to take over power.

“We need to hold party nominations soon. This is because we need a united and formidable contest in 2022,”  Linturi said.

Waruguru noted that Jubilee cannot be used as a platform for political failures to revive their dwindling fortunes.

“We welcomed Odinga into our house as part of a pact to unite Kenyans for the prosperity of the people. However, it appears the handshake was not a sincere one but a bridge to help him ascend to power in 2022,” the Laikipia Woman Rep said.

Ruto said he would not be drawn into the 2022 political race debate, arguing that he was busy ensuring that the Jubilee manifesto and the Big Four agenda are realised.

“But I do not have a problem competing with Mr Odinga in 2022. But he must first commit to Kenyans that in case of a defeat, he will gracefully accept the decision of Kenyans,” the Deputy President said.

Lugari MP Ayub Savula who is also the ANC deputy party leader said while it was Raila’s democratic right to offer his candidature in 2022, it would be morally good for him to support Mudavadi whom he described as a compromise candidate.

The second-term legislator said he had held several meetings with Raila to persuade him together with President Kenyatta to endorse the former Deputy Prime Minister.

“The compromise candidate for 2022 is Mudavadi and as a party we have settled on him to carry the flag. Mudavadi cannot win alone and therefore Raila should this time around sacrifice his ambitions for Mudavadi who has supported him twice,” Savula told the Star.

He added: “Considering that Raila also comes from the Western belt of the nation, he should endorse Mudavadi then President Uhuru will nominate for us a running mate. This will be a winning team.”

Savula who is  reported to be eying to succeed Kakamega Governor Wycliffe Oparanya said if Raila will not shelve his presidential ambitions in favour of Mudavadi, then they will have to “sit and restrategise”.

“We only have three serious presidential candidates, that is Raila ,Mudavadi and Ruto. Ruto will definitely be on the ballot and it is prudent that Raila only supports a different candidate and that is Mudavadi,” he said.