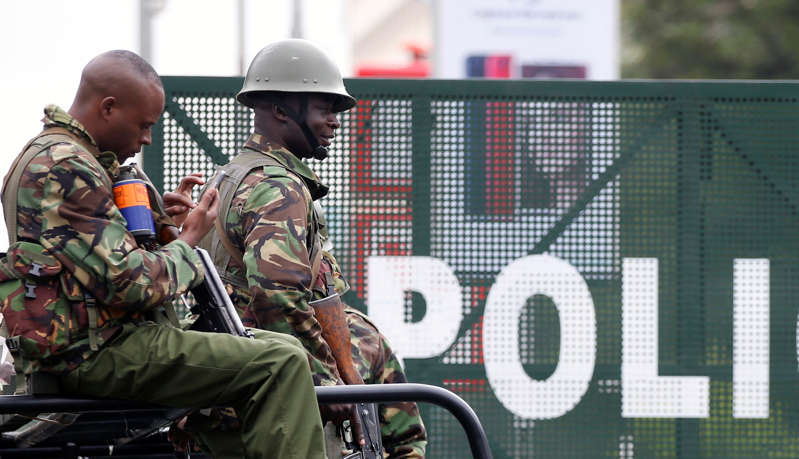 Police officers roughed up a man to the point of undressing him in public after he refused to be arrested attracting hundreds of residents of Kolongolo village in Kwanza, Trans Nzoia County, who demanded to be told why he was being beaten.

But before they got answers in the Sunday evening incident, two of them lay dead and at least 10 were injured after an officer shot them. Another three died of their injuries later in the day.

According to witnesses, the officers were angry that the man identified as Dan Juma, stood up to them, demanding to know why he was being beaten.

Mr Juma had been reported at Kolongolo patrol base for allegedly assaulting his wife and the officers had been sent to arrest him.

Contrary to what Inspector-General of Police Joseph Boinett indicated in a statement to newsrooms Monday that an irate public attacked the officers after they arrested Mr Juma forcing them to open fire, the residents said locals were only responding to the brutal beating of the man by the policemen.

Once the two were shot dead, hundreds of residents confronted the officers as they attempted to load the bodies in a police vehicle.

This led to another round of shooting.

Those injured were admitted to various hospitals in Kitale.

Among those injured was Trans Nzoia Speaker Joshua Werunga who was admitted to Mediheal hospital, Eldoret.

Mr Juma who was handcuffed is said to have escaped.

One of those shot, Mr David Mulongo, 38, said some people stoned the police as they tried to arrest the man and they responded by shooting at them.

Mr Anthony Walela, whose younger brother Morris, was shot dead, however, said: “The officers used excessive force on the suspect which left him almost naked. This angered the public who gathered at the scene.”

Monday, the police watchdog, the Independent Policing Oversight Authority (Ipoa), said it had launched investigations into the shooting.

In a statement, Ipoa chairperson Anne Makori said their investigators were already on the ground with a view of unravelling the circumstances that led to the fatal shootings, injuries and “more particularly whether the police officers were justified in the use of their firearms.”

Ms Makori noted that if the officers are found culpable, they would be recommended for prosecution.

“I’ve spoken to Inspector-General Joseph Boinett who has assured me that he is taking this matter seriously and has send a team to investigate the circumstances under which the shooting happened and immediate action on all those involved in loss of life including his officers,” said Mr Wamalwa who visited Mr Werunga in hospital.

The Speaker claimed that the officers roughed him up and hit him on the head with a blunt object after he questioned their use of excessive force.

Mr Werunga, who spoke with the Nation from his hospital bed, said that he asked the police why they were ‘cooking’ a report on the attack to cover their colleague who was involved in the shooting.

Governor Khaemba demanded the transfer of officers at the station saying proper investigations would only happen if they were moved.

County Commissioner Erastus Mbui said the officer behind the shooting had been arrested.