Mr. Tabichi, a Mathematics and Physics teacher at Keriko Mixed Day Secondary School in Pwani Village, Nakuru was announced winner of the global prize on Sunday evening at a ceremony held in Dubai.

Mr. Tabichi, 36, was crowned the winner for dedicating his life to helping others. He gives 80% of his teaching salary to local community projects, including education, sustainable agriculture and peace-building.

“He’s changed the lives of his students in many ways, including the introduction of science clubs and the promotion of peace between different ethnic groups and religions. He has also helped to address food insecurity among the wider community in the famine-prone Rift Valley,” said the Varkey Foundation.

Mr. Tabichi, who becomes the first African and male teacher to win the global award, emerged winner out of 10 finalists who were among 10,000 applicants for the award.

His win was announced on stage by movie star Hugh Jackman at the Global Education and Skills Forum.

“His dedication, hard work and passionate belief in his student’s talent has led his poorly-resourced school in remote rural Kenya to emerge victorious after taking on the country’s best schools in national science competitions,” says the foundation. 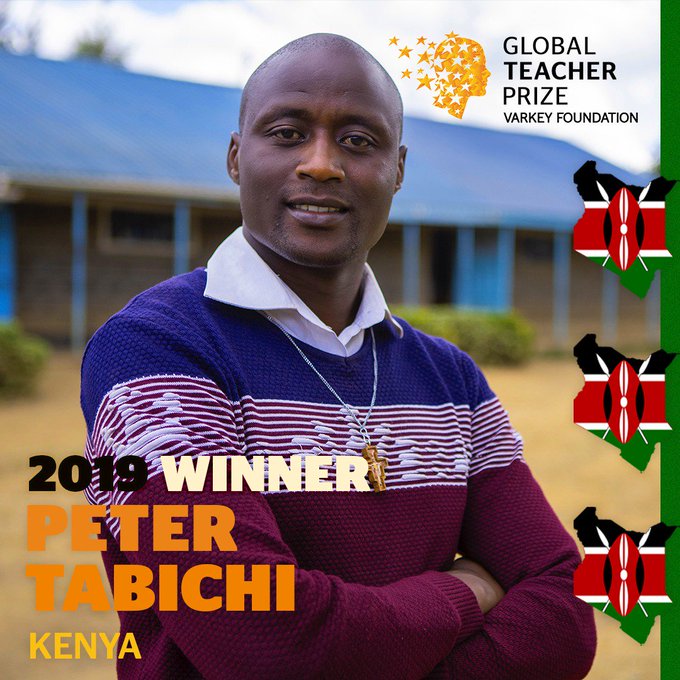 President Uhuru Kenyatta has congratulated Mr. Tabichi, saying he is “a shining example on what the human spirit can achieve.”

“On behalf of all Kenyans let me congratulate you on winning the Global Teacher Prize for this year. You are a shining example on what the human spirit can achieve not just for Kenya, not just for Africa but the world.

“Peter you chose to teach in a remote part of Kenya and transform lives in such situations. A choice that am sure was difficult. You give me faith that Africa’s best days are ahead of us and your story will light the way for all future generations,” said President Kenyatta on Sunday.