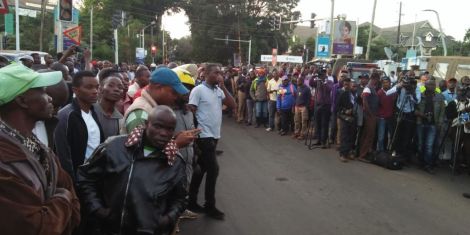 One suspect has been arrested following the Tuesday 14  Riverside Drive attack at Hotel Dusit D2, the Nation reported.

A number of people have been rescued from the horrific scene, police confirmed.

Police are still battling the armed assailants who staged the terror attack.

During the press briefing at 6pm on Tuesday, Inspector General of Police Joseph Boinnet said the gunmen were still holed at the dusitD2 complex.

“We regret to inform that today at 3 o’clock in the afternoon, a group of unknown armed assailants attacked the Dusit complex in what we suspect could be a terror attack,” said Boinnet.

He added: “We are aware that there still could be some armed criminals still holed up in the building and our special forces are engaged in an operation to flush them out.”

Boinnet further pointed out that the number of casualties was still unknown even as he confirmed that many people had been evacuated from the area with some having sustained injuries.

“Security and emergency services responded quickly to the incident and we immediately cordoned off the area and the situation is being managed and we’ve made evacuation of many persons in the complex and the operation is still ongoing.

“However, we regret to inform that there have been injuries in the attack and we are in the process of confirming the numbers and types of injuries incurred,” he added.

IG did not disclose the number of people that are confirmed dead.

However, reports indicate that three people are confirmed dead with scores sustaining injuries.

Hospitals receiving survivors are asking for willing Kenyans to donate blood to assist the injured in the horror attack.

4 thoughts on “One Suspect Arrested in 14 Riverside Drive Attack  ”