Families’ shock as no bodies to bury, just ashes

By late Wednesday, that aircraft model had been grounded globally by regulators and airlines.

• Virtually none of the bodies of the 157 people including 32 Kenyans who perished in the Ethiopian airline crash will ever be recovered.

• Grieving relatives and friends who flew to Addis Ababa in hopes of retrieving something will be devastated by the lack of remains. 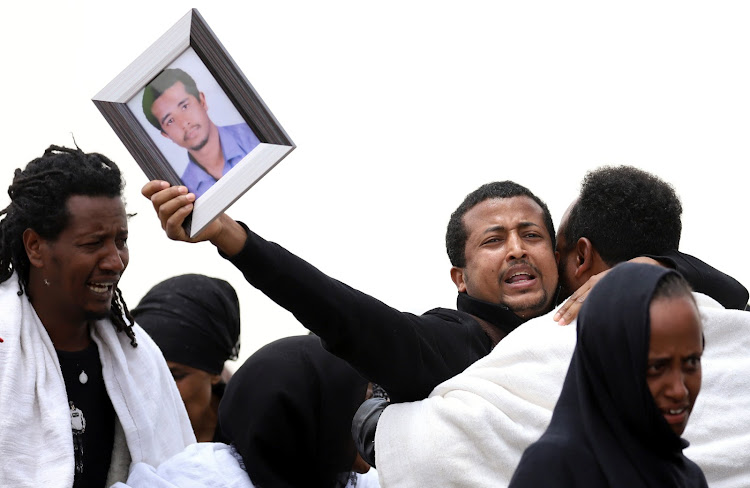 DEVASTATING: A relative holds a portrait as he mourns at the scene of the Ethiopian Airlines Flight ET 302 plane crash, near the town Bishoftu, near Addis Ababa, Ethiopia March 14, 2019.
Image: REUTERS

Most of the bodies of the 157 people including 32 Kenyans who perished in the Ethiopian plane crash will never be recovered, identified and buried.

Grieving relatives and friends who flew to Addis Ababa in hopes of retrieving something will be devastated by the lack of remains.

A BBC interview, the CEO of Ethiopian Airlines Tewolde Gebremariam said most of the bodies were reduced to ashes by the intense heat of the fire and only a few pieces have been recovered.

“By the time I reached the site on Sunday the plane was completely underground and there was no sign of it above the ground. We had to dig up the wreckage to try and find bodies.

It is very sad that we were not able to get bodies. We only have very small pieces of the remains. That is the main challenge we have now

The Ethiopian Airlines flight from Addis Ababa to Nairobi crashed on Sunday, killing all aboard. It carried passengers from 30 countries and 21 United Nations staff members.

The jet plunged into a field 60km  kilometres (37 miles) outside Addis Ababa, and the impact of the crash and fire left the victims’ remains in fragments.

They could take weeks or months to identify, if at all, experts say. If there is anything to identify, DNA or dental records would be required.

Yesterday relatives of the dead stormed out of a meeting with Ethiopian Airlines staff in the Skylight Hotel near Bole International Airport, deploring what they called a lack of transparency, while others made the painful trip to the crash scene.

The angry family members left the meeting at the hotel, saying that they are frustrated by a lack of answers to their questions. Some stood up to ask questions.

They said they wanted more “transparency” from the airlines and more details of Sunday’s accident. 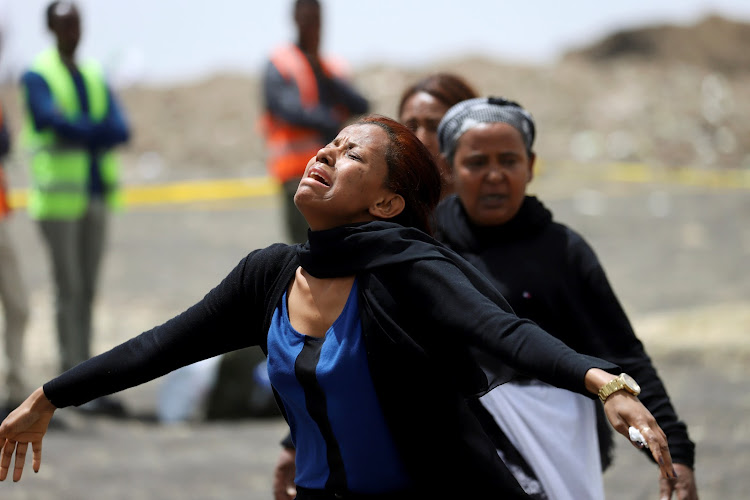 A relative mourns at the scene of the Ethiopian Airlines Flight ET 302 plane crash, near the town Bishoftu, near Addis Ababa, Ethiopia March 14, 2019.
Image: REUTERS

An Ethiopian Airlines staff member replied that the crash was under investigation and that more details were emerging day by day.

A stoic man in a dark coat said he was steeling himself for the three-hour journey to the crash site.

Some held up framed photographs of loved ones as the meeting room filled up,  becoming a packed grieving centre.

Couples held each other, slumped forward in their chairs, their gazes downcast. Some held their heads in their hands.

Women in headscarves leaned for comfort against heir relatives.

It was an emotional and heart-wrenching scene at the crash site when relatives arrived to pay their respects.

Family members mourned at the site. They placed portraits and floral tributes at the site where Flight ET302 crashed.

Staff from United Nations agencies also visited the site on Thursday to pay their respects.

The embassies of Kenya, Canada and China had also asked Ethiopian Airlines to designate conference rooms for their citizens.

An Ethiopian delegation had flown the black boxes to Paris for investigation and analysis. Contents of the flight data recorder and cockpit voice recorder will provide critical details about what happened.

The crash was the second disaster involving the Boeing 737 MAX 8, the world’s most-sold modern passenger aircraft, in less than five months.

By late Wednesday, that aircraft model had been grounded globally by regulators and airlines.

A software fix for the 737 MAX 8 that Boeing has been working on since the Lion Air crash on October 29 in Indonesia will take months to complete, the FAA said on Wednesday.

The crash site is still being combed for identification, debris and remains. Forensic investigators and Ethiopian Airlines employees are preparing to slowly walk through the site, walking a grid, to search for evidence that has gone unnoticed, raising their hands when they find anything significant.

Several dozen workers from multiple teams are on site, most wearing surgical masks and some in white forensic suits.

Debris has been broken into thousands of small pieces, making the task of recovering each part complex. The largest engine piece on the site was around the size of a small table. There were pieces of wings and fuselage.

How do you sum up the events of last Sunday?

Sunday has been a very difficult and sad day for Ethiopian airlines and Ethiopia as a country.

I pass my deepest sympathy and condolence to friends and relatives of the passengers who were on ET 302. The families are coming to Addis to visit that site and we are facilitating that.

How far are the investigations now?

By the time I reached the site on Sunday, the remains of the plane were completely underground and there was no sign of it above the ground. We had to dig it up the wreckage to try and find bodies. It is very sad that were not able to get bodies. We only have very small pieces of the remains. That is the main challenge we have now.

Do you have an initial idea of what happened?

Speculation is not helpful in accident investigations but there are similarities between Lion Air accident and the one that happened on Sunday. It is the same aeroplane model, both were brand new, both happened during take-off, the duration of the flight was very short and in our case it was six minutes. The pilot reported problems and asked to be allowed to return to the airport and he was not able to return to base.

Should all countries ground all the Boeing Max 8s until their safety is guaranteed?

Personally, that is what I believe because of the similarities that have been observed. I recommend that the right thing to do because safety should be the first thing to ensure and extreme caution should be taken.