As Kenya grapples with rising cases of femicide, similar violence is plaguing those living in America. Elizabeth Kogo escaped death by a whisker in Kansas at the hands of her Kenyan fiancé

•The more Elizabeth Kogo succeeded in life, the more her Nandi partner degenerated to threats and harassment

•Eventually, he bought a gun and tried to kill her, but ended up using a hammer when it jammed 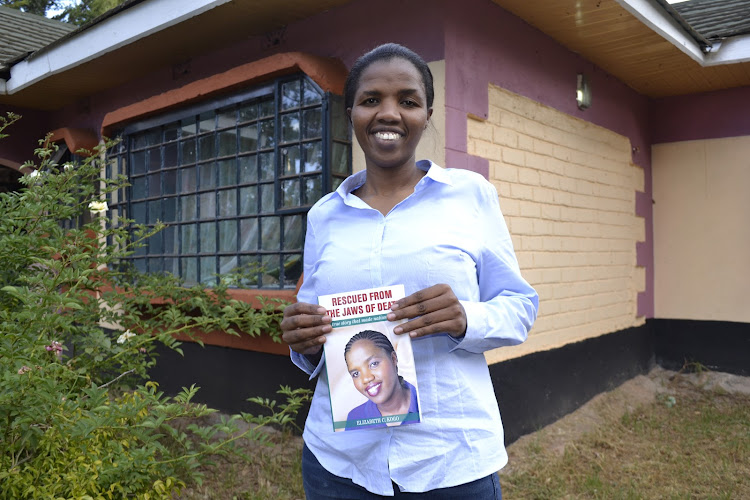 Elizabeth Kogo, 37, counts herself lucky to be alive to tell her story of surviving a horrific hammer attack by her fiancé during her 29th birthday.

For her, January 23 each year has special significance in her life, as it is her birthday. And since childhood, it had become a tradition to mark it with pomp and style.

That included merrymaking and getting together with friends wherever she was, and more so having migrated to the US, away from home in Ndaptabwa village, Nandi county.

To celebrate the day, her workmates at Wichita had organised a get-together party for her, unaware of the strained relationship the young family was living in.

Her boyfriend Gideon Maiyo had felt insecure and started battering Kogo on flimsy grounds, in an attempt to take control of the ever-ambitious woman.

Maiyo had qualified as a certified nurse aid and worked in a nursing home, while Kogo worked at a facility housing people with various physical and mental problems.

Kogo had fallen in love with Maiyo three months after landing in the US. They started dating, which subsequently led to them living together.

They had been introduced to Maiyo by “a mutual friend” in Germany. Kogo would not like to mention his name, as they originate from the same county and community, Nandi.

Kogo saw a perfect partner in her man “from home”, hoping she had someone who would understand her, as they came from the same rural area in Kenya.

Their rural homes are about 30km apart from each other, hence the confidence and trust she had. Maiyo came from Nandi Hills, while her home is in Ndaptabwa-Kosirai. She was convinced Maiyo was the perfect choice and a Godsend.

Kogo was 10 months old in the US and wanted to mark her 29th birthday for the first time since migrating to Wichita city in Kansas State to join Maiyo.

She had landed at the St Paul Minneapolis Airport, Minnesota, from Cologne, Germany, after winning a diversity visa lottery (Green Card) in 2010, accompanied by her son from a previous interracial relationship, Florian.

She was received by her village mate John Paul Rono before getting in touch with Gideon Maiyo, who had been in the US for many years and had met her via social media after introduction.

Since it’s a five-hour drive from Minnesota to Kansas, Kogo felt it was better for her to move into Maiyo’s apartment at the 8100 block of East Harry, Wichita. They were required to sign on the lease document to bind them on rent and security matters.

“We lived as a couple in the apartment, and we showed determination to formalise our relationship by his parents going to our home for negotiation,” Kogo said.

Under the Green Card regulations, winners are eligible to work and permanently live in the US, enjoying most of the benefits other citizens get.

For Maiyo, who had lived in the US for many years without proper immigration documents, the arrival of Kogo into his life was an opportunity for him to be naturalised.

We lived as a couple in the apartment, and we showed determination to formalise our relationship by his parents going to our home for negotiation

“I could meet all our family’s needs, including paying rent and school fees for my son, who was in daycare. This threatened and intimidated him,” Kogo said.

Maiyo started questioning her on why she was working in a place where there were many Kenyan men, and demanded that she quit and look for employment elsewhere.

After many threats and harassments, and Maiyo showing scary traits of violence against her, she opted to remain silent and send her son back home in Kenya, hoping to secretly abandon her fiancé.

Maiyo had already sensed her plan to move and leave him after he received a call from the lease office, telling him his fiancée had requested to have her signature in the lease documents withdrawn.

This enraged Maiyo, and he hatched a plan to kill her. He changed the status of his Facebook profile and wrote, “Who among my friends would like to see me dead on my birthday?”

On the morning of January 23, 2011, Maiyo placed an online order for a gun. This received an immediate response, with the vendor providing him with his phone number to facilitate price negotiation and other logistics.

It was eventually delivered to him at a price of  $250 (Sh25,000) by an African American, who delivered it to Maiyo during Kogo’s birthday. The gun vendor also trained him on how to cock and pull the trigger to shoot his victim at close range.

Maiyo had expected his girlfriend to arrive into their two-bedroom apartment late in the night after celebrating her 29th birthday, which he hoped would be her last time.

As fate would have it, Kogo made a surprise arrival long before the expected 10pm. She arrived at 5pm, finding Maiyo off-guard.

“When I knocked the door and opened it, I realised he was surprised to see me at that hour. Without uttering a word at me, he pointed the gun at me,” Kogo said.

“I was sweating and trembling, pleading with him to spare my life as I remembered my son Florian and my six siblings and mother, who were looking up to me for support. But he could not listen. When he pulled the trigger, the gun jammed… God had jammed it.”

She confesses having only witnessed such in a movie and never thought that in her life, she could come face to face with a gunman.

Shocked at the unfolding scene, she wanted to escape, but her feet couldn’t move. Maiyo dropped the gun, and swiftly picked up a hammer they had bought to repair a desk in their house.

He hit her with all the force and power eight times on the right side of the head, until the hammerhead got broken and lodged into the skull.

A neighbour, Andrew Murudi, heard a commotion at the couple’s apartment and screaming from someone crying for help, claiming she was being killed.

He dialled the emergency police service number 911, and the cops promptly responded and arrived soon after. They found Kogo lying unconscious in a pool of blood, with brain matter flowing freely from the hole in her head.

She was rushed in an ambulance to Wesley Medical Centre reportedly “in very critical condition”, with chances of survival at times being rated as almost nil.

Meanwhile, as police were moving into the apartment, Maiyo jumped into his car, which he had strategically placed at the parking bay, and drove away at high speed to escape arrest.

He knew too well he had a pending and unconcluded case before a district judge, who had released him on bail and was set for hearing the following month of February.

He had been arrested for assault, malicious damage of his fiancée’s mobile phone and threatening to harm her with a kitchen knife.

“I remember him shouting at me that if you are smart, don’t come out of the bathroom because I have a knife ready to slaughter you. I called 911 for assistance and they responded immediately,” she remembers.

It was the first time she felt threatened and completely subdued by her lover, who was determined to completely take control over her.

Maiyo was apprehended by police after crashing his car into Kansas Turnpike after several miles and hours of a chase, as he tried to escape arrest and possibly commit suicide.

He had told his girlfriend he would rather commit suicide than be deported back home, claiming to have been brought up under very harsh conditions that included violence.

“If they put me in a plane destined for Nairobi, I would rather jump out of it and die than land at Jomo Kenyatta International Airport,” Kogo remembers him vowing.

At Wesley Medical Centre, doctors carried out an emergency brain surgery to remove the hammer lodged in her skull, a very complicated and delicate process. A team of doctors and surgeons successfully retrieved the 750g hammer from her brain.

A CT scan carried out on her damaged brain showed she had suffered traumatic brain injury damage. She was admitted at the hospital’s ICU before being moved to the high-dependency unit for close to four months, of which she was in a coma for a month.

Doctors gave up and requested for her mother Regina to travel to US Wesley Hospital to append her signature, so they could remove life support to let Kogo die peacefully.

Regina, a staunch and devoted Catholic who missed becoming a nun by a whisker, travelled holding her rosary and praying all the time she was airborne.

“My mum was sure if she stood beside me and made a prayer for divine healing, miracles could happen and we would walk,” Kogo says.

True to her word, when she landed in Kansas, she was taken straight to the bedside of her daughter, and before she uttered a word, doctors informed her reasons why she had been summoned.

She refused to sign and instead went to her knees and prayed, and for the first time opened her eyes.

Kogo says, “This is the day I was baptised with fire. I had been baptised by my uncle the late Fr John Cheboryot at Christ the King church-Chepterit when I was a kid. This was my second baptism.”

Maiyo, on the other hand, was being held at Sedwick county jail in Kansas, awaiting the start of his trial for first-degree murder.

However, Kogo’s recovery continued steadily, such that within six months, she was out of hospital. But she had to start learning things afresh, including her speech, walking and general body coordination.

Her central nervous system had seriously been compromised, as the injuries had made her slower almost in everything. Kogo underwent physical, occupational and psychological therapy, which enabled her to recover her speech and ability to walk.

Within months, she got full recovery and began reflecting back on the blunders and regrets she had in her life.

Gideon Maiyo was found guilty of attempting to kill his lover and battering her. He was convicted to serve 15 years in prison. The judge ordered that as soon as he completes his jail term, he be deported back to his homeland in Kenya.

The court lined up seven witnesses, including the victim of the vicious attack, Elizabeth Kogo, who gave a chronology of events that led to the attack.

She has since published a book, “Rescued from the jaws of death”, giving her own story of domestic and gender-based violence.

She recovered and went back to university to study social science, abandoning her lifetime wish to study nursing after the attack.

She is currently at home in Nandi, making public appearances on gender and domestic violence, apart from motivating students in institutions across the county.

Kogo still has fears that as soon as Maiyo finishes serving his sentence in the US, he will come home to revenge.

“I don’t know what he will do to me and my son Florian. It keeps bothering me all the time I remember what happened to me,” she says.