A Canadian cartoonist’s illustration of President Donald Trump playing golf over the bodies of two drowned migrants went viral Wednesday. Two days later, Michael de Adder said on Twitter that he had been let go by a publishing company in New Brunswick, Canada.

De Adder’s illustration depicted Trump asking the two dead migrants, “Do you mind if I play through?”

The cartoon refers to the image of Oscar Alberto Martínez and his 23-month-old daughter, Angie Valeria, lying face down in water surrounded by reeds. The two drowned while attempting to cross the Rio Grande River to get into the United States. 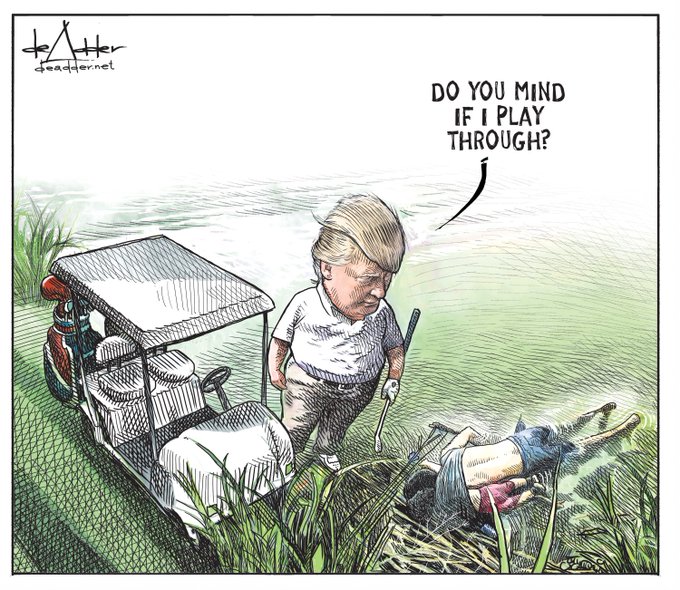 “The highs and lows of cartooning. Today I was just let go from all newspapers in New Brunswick,” De Adder tweeted. He later clarified that he had technically been under contract to work for Brunswick News Inc., and wasn’t an employee who could be fired.

Brunswick News Inc. confirmed on Sunday that it canceled a freelance contract with de Adder but said “it is entirely incorrect to suggest” that it was because of the Trump cartoon.

“This is a false narrative which has emerged carelessly and recklessly on social media,” the publishing company wrote. It said that de Adder never offered the Trump cartoon to the company and had already decided to “bring back” another cartoonist it said was popular with readers.

“Negotiations had been ongoing for weeks,” it stated. It did not respond to further requests from comment from CNN Business. Monday is a national holiday in Canada.

In a tweet on Monday, de Adder said he never submitted the cartoon to Brunswick News “for fear that I might be fired.”

He told CNN Business in an interview on Monday that the cartoon ran in the Chronicle Herald newspaper in Halifax on June 29, “after it went viral but before it went supernova.”

He described himself as feeling overwhelmed by the situation. “The way I was let go was swift and fell on the heels of the last refugee cartoon,” de Adder said. “I had every reason to suspect it was over that cartoon. … I was given no reason. I inquired and inquired.”

“It was clearly my work. And Trump was always their No. 1 concern with me. Always,” said de Adder. He said he stopped sending Trump cartoons, adding “It got heated every time there was a Trump in the lineup.”

De Adder tweeted Sunday that he would bounce back from losing the job and that he just had to “recoup a percentage of my weekly income.” De Adder has a book he said will be released in September.

517 people are talking about this

Wes Tyrell, president of the Association of Canadian Cartoonists, a professional group for artists, claimed that the Brunswick newspapers avoided Trump as a subject of its cartoons — and de Adder “was doing them with regularity for the last couple of years, like any cartoonist.”

Tyrell and de Adder point to family connections between the ownership of the newspaper company and Irving Oil, a major Canadian energy company with interests in the United States as well. Arthur Irving, the owner of Irving Oil, has a net worth of $6 billion, according to the Bloomberg Billionaires Index. The Irving family is one of the richest in Canada.

“For a brief period, de Adder was the poster boy for the anti-Trump movement — a good place to be if you’re a cartoonist, but a bad place to be if you work for a foreign oil company with business ties to the United States,” Tyrell wrote in a statement on Facebook.

De Adder’s Trump depiction was the latest controversy surrounding political cartoons. Earlier this month, The New York Times said it had decided to do away with editorial cartoons altogether following outrage over an errantly published an anti-Semitic cartoon in its international edition.