There is a growing divide between President Kenyatta and Deputy Ruto, highlighted by a recent corruption scandal.

The showdown could end the political alliance between President Uhuru Kenyatta and and Deputy President William Ruto.

The divide between them grew after July 22, with the arrest of Cabinet Secretary to the National Treasury Henry Rotich, who was accused of corruption.

Rotich, who pleaded not guilty, was released on bail the following day. He had been appointed by Kenyatta in 2013 at Ruto’s request.

Ruto held his tongue on the indictment of Rotich, a key figure from his populous political support base in the northern Rift Valley region.

Meanwhile, another political development could stoke tension between the two top leaders in the right-wing Jubilee Party administration.

It will soon present its report and recommendations to Kenyatta and opposition leader Raila Odinga.

The Ruto camp has never hidden its distrust for the Building Bridges Initiative (BBI), an outcome of the March 2018 peace pact between the president and Odinga – his long-time opposition foe. The initiative was symbolised by the famous public handshake between the two men – a moment now simply referred to as “The Handshake“.

Ruto’s supporters fear that the rapprochement signals Kenyatta’s plan to renege on a power-sharing and succession pact, under which he would back Ruto for president at the 2022 elections after serving two terms.

Any major constitutional amendments proposed by BBI might lead to referendum votes, which could force Ruto to openly break with Kenyatta and begin an opposition movement.

If that happens, his days as deputy president might be numbered.

These divisions come against the backdrop of an intra-party split – Jubilee Party politicians are far from united over President Kenyatta’s anti-corruption drive.

Rotich and nearly 20 other top officials from the treasury and other departments were arrested after an investigation into the alleged loss of 21 billion Kenyan shillings ($203m) on ghost dam construction projects.

But Ruto’s allies say they are being unfairly targeted in the anti-corruption drive, pointing also to the July 28 arrest of Kiambu County Governor Ferdinand Waititu.

Another politician, Member of National Assembly Ndindi Nyoro, has warned over his impending arrest for corruption, claiming he is being targeted because he supported Ruto’s 2022 presidential bid.

Ruto has, for the most part, avoided personally challenging the anti-corruption campaign, a key legacy project for Kenyatta, leaving that fight to his followers.

However, investigations into the Arror and Kimwarer dams have touched a raw nerve.

In late February, when police first questioned Rotich, Ruto publicly criticised the inquiry, insisting that no money had been lost.

Addressing a Pastoralist Leaders Forum, Ruto depicted the investigation as a sinister bid to claim his political strongholds in the wider Rift Valley region, and by extension, deprive water-starved pastoralist communities of northern and northeastern Kenya of a vital development resource.

“There will never be tension in Rift Valley. People have learned and there has been genuine reconciliation. Not even an UhuRuto split can undo the ties,” said Senator Aaron Cheruiyot, a vocal Ruto supporter.

Cheruiyot added that the criminal charges against Rotich confirmed what Ruto has been saying all along: “The government did not lose 21 billion [Kenyan shillings]. The issue is whether proper procurement procedures were followed.

“The Ruto base is concerned by what they justifiably see as a biased war on corruption. If you apply logic to almost all the high-profile cases you notice a systemic plot at elimination from high office and nothing to do with corruption.” 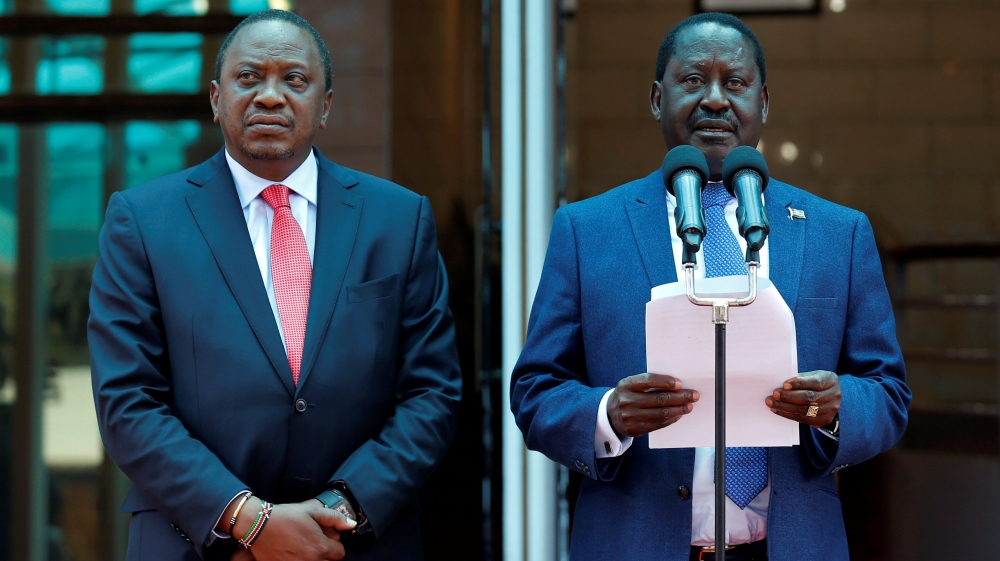 Opposition head Raila Odinga, right, is now viewed as a political shield for President Uhuru Kenyatta, left, as a rift between the Kenyan leader and his deputy widens [File: Thomas Mukoya/Reuters]

There is also a rift in President Kenyatta’s central Kenya base.

Meanwhile, members of Odinga’s centre-left Orange Democratic Movement (ODM) defend Kenyatta whenever he is under pressure from pro-Ruto forces within his own party.

In short, Odinga has become Kenyatta’s shield as Ruto leads a de-facto opposition movement within Jubilee.

This is a prevailing, if confounding, political environment.

While Ruto has resisted the temptation to jump right into the fray, regarding the Rotich affair, one of his supporters, Kipchumba Murkomen, Senate majority leader, emerged as Rotich’s lawyer.

He promised to fight for Rotich in court and the public arena.

Wambugu accused Ruto of sponsoring MPs to join him at political rallies across the country in defiance of the president’s plea against premature election campaigns.

“What makes it so terrible is that the person who is leading this drama is the president’s own deputy. And because he is doing it through proxies, he thinks Kenyans do not see what he is doing,” said Wambugu.

“Ruto thinks he’s the only smart guy in the room, and that all other Kenyans, including his boss, are stupid,” he added, accusing Ruto of publicly supporting Kenyatta, all the while egging on his supporters to attack the president.

The big question now in Kenya is not if, but when Kenyatta and Ruto will openly part ways.