Ahmed Gaid Salah calls for a constitutional procedure that would see the president’s removal on health grounds.

Algeria’s army chief Ahmed Gaid Salah has called for President Abdelaziz Bouteflika  to be declared unfit to rule the country, following weeks of protests against the ailing head of state’s decision to seek a fifth term.

Although Bouteflika later reversed his decision, the 82-year-old postponed elections set for April and said he would remain in power until a new constitution was adopted, a move that effectively extended his current term.

In a televised address on Tuesday, Salah, the army chief, said he considered the people’s demands to be valid and that the presidency should be vacant.

“We must adopt a solution that helps us out of this crisis … a solution that respects and adheres to the constitution so that it’s a suitable one for all sides,” Salah said.

“This solution is stipulated in Article 102 of the Constitution,” he said.

Under Article 102, the Constitutional Council could determine the president is too ill to fully exercise his functions, and ask the parliament to declare him unfit. Bouteflika has rarely been seen in public since suffering a stroke in 2013.

If a two-thirds majority of the parliament’s lower and upper house ratify the council’s decision, the chairman of the upper house, Abdelkader Bensalah, would serve as caretaker president for at least 45 days.

The army chief is among the top power brokers in Algeria and his announcement could pave the way for Bouteflika’s removal. 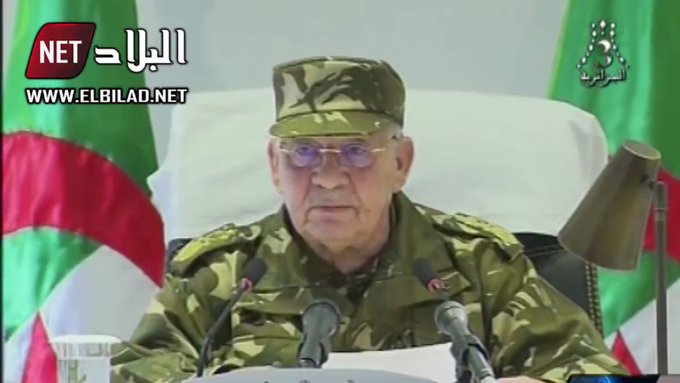 The move comes days after Hocine Khaldoun, spokesman for the ruling National Liberation Front (FLN), said he will ask the party to withdraw its support for Bouteflika’s proposal to hold a national conference aimed at getting the country out of its current political deadlock.

An Algerian protest leader rejected the army’s attempt to have Bouteflika declared unfit, saying the people wanted a national government of consensus.

“The Algerian people don’t accept that the government, or a symbol of power of this system, manages the transition period,” Mustapha Bouchachi, a lawyer and protest leader said, was quoted as saying by the online outlet Huffpost Maghreb.

Dalia Ghanem Yazbeck, a resident scholar at the Carnegie Middle East Center, told Al Jazeera the military has been sending “mixed messages” from the beginning of the demonstrations.

Algerian people won the battle, but the struggle is not yet over

“At first, it was ‘we will not tolerate chaos’, and then, ‘we are with the voice of the people’, and what Gaid Saleh said today was confirmation that the military has taken a strong stance in the political arena,” she said from Algiers, the country’s capital.

“What he said today confirms that the Algerian military has been, and will remain the devoted guardians of Algeria’s power,” Yazbeck said.

The army likely has a replacement in mind, she said, which it might make public in the next few days.

“It’s a major turning point for Algeria … he (Bouteflika) set the stage for a new national dialogue in Algeria to pave the way for democratisation of the country,” Bishara said.

“So, what is happening today, from the looks of it, is quite the opposite of what we were promised.”

Salah’s announcement signalled “a major escalation” and “basically means that the army has taken over,” added Bishara.

Said Salhi, head of Algeria’s League for Human Rights, told Al Jazeera that he does not believe that President Bouteflika impeachment is the “ultimate solution”.

“It is important that the army does not remain silent,” he said. “However, I cannot be satisfied with Gaid Salah’s decision since we are not dealing with a simple electoral crisis but with a deep political crisis.”

He added: “The situation today is not conducive for conducting transparent and fair polls. First, we need to push for a fresh political start, featuring a wide ranging far-reaching measures. This will include reforming the law on the associations, the law on the political parties, and the law on the public media as well. This cannot be achieved within the next three months. A transition process needs more time”.

Meanwhile, earlier on Tuesday, thousands of people returned to the streets of Algiers calling on Bouteflika to resign, keeping up popular pressure.

Assyl Moulessehoul, a 24-year-old language student in Tlemcen, said it appeared to be a “soft military coup.”

“The army should not interfere in politics and should stay away from the ongoing political crisis. What we want is the regime to move from a military to a civilian rule,” he told Al Jazeera, adding that he would return to demonstrate again on Friday.

“He is trying to save himself by sacrificing Abdelaziz Bouteflika,” she said. “We are not naive. For weeks, we have called upon the entire ruling clique, including Ahmed Gaid Salah, to step down. We want the whole old guard to step aside.”

Why photo of woman chanting has come to symbolize Sudan protests
Unrest at Kamiti Prison as inmates resist contraband
Huduma Namba compulsory: You will need Huduma card for all services