Skip to content
Her story was a pitiable one. Like the proverbial cat with nine lives, Zaharia Mohammed survived the Boko Haram raid on Baga, a Borno fishing town, on December 26, 2018. What is more significant is the heartwarming story of how she gave birth to her baby in the bush after an excruciating one hour trek.

“I didn’t know I could come out alive from that condition because I nearly passed away in the bush,” Zaharia, 27, told Sunday Sun at the Teachers Village camp for displaced persons in Maiduguri. Boko Haram had attacked Baga, a thriving town along the Lake Chad shores, some 190 kilometres to Maiduguri, Borno State capital on Wednesday December 26. For Baga residents, it was a tragic Boxing Day coming a day after Christmas festivity. Scores of residents were forced to flee the troubled town, but Zaharia couldn’t join the exodus of people immediately because of her condition – she was already nine months pregnant!

The afternoon of Wednesday was a moment of decision for Zaharia: was she to stay in Baga with Boko Haram though unsure of her survival or run into the bush with others and still die? She later made the choice to take the greater risk of fleeing with others despite her condition.

With that decision came an unusual surge of adrenaline and strength. “Many people ran into the bush that very day but I couldn’t run immediately. My body was doing somehow. I later summoned courage and held three of my younger children and followed others as they fled into the bush,” she disclosed.

She said she left her husband with the other three children though unsure of where they fled to. “I learnt my husband has fled to Chad with the children. I really don’t know where he is with our other children. The situation was frightening and nobody was waiting for anyone at that time,” she explained. 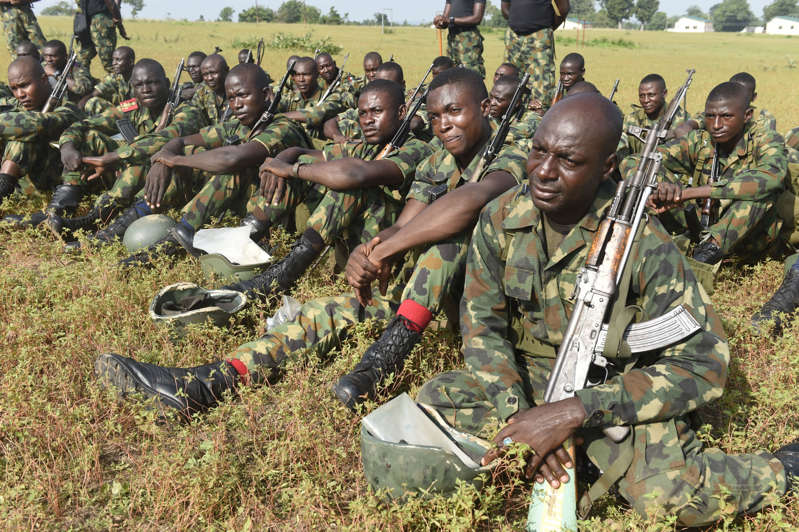 The journey to the bush was very hectic but she mustered the courage needed and moved on. Her resilience was however put to test when some women almost abandoned her due to their pace of movement. “I asked myself, is it not better to even stay behind and be killed by Boko Haram? This was because the suffering was much,” she said.

Her delivery of the baby boy in the bush without any medical support was a divine intervention. “We were in the bush for two days. On that Friday, I was already exhausted. I knew it was time for the baby to come but I didn’t know how it would happen since I was not at home. The labour started like that in the bush. That was all I could remember,” she said. Two eyewitnesses who were in the bush corroborated her account, saying she only knew she was still alive when she was finally delivered of the baby by some older women who were around.

“We used our wrapper to cover the baby. We also got water to wash her and the baby,” Hajara, one of the witnesses who assisted in the delivery, said.

They continued their journey from the bush in Baga to Monguno, a nearby town located about 55 kilometres away. They then boarded trucks in Monguno and headed for Maiduguri on Saturday morning and got to a camp for displaced persons. But then, Zaharia said she’s yet to immunize the child at the camp clinic. “They have not attended to me because I am yet to collect card (identification for IDPs registration at camp),” she said. She is also yet to name the baby because she has not seen the father after the displacement in Baga.

Back to square one

To many of the Baga survivors, the IDP camp at Teachers Village is a familiar place. Many of them had lived in the camp from 2014/2015 till mid 2018 when they were encouraged to return to their ancestral homes.

They were however displaced again from their villages the second time barely seven months after vacating the camp. Kantuma Mohammed said it was like getting back to square one. “We are back again to where we left sometimes ago, may Allah end this problem,” she prayed.

Hundreds of IDPs complained about lack of food and medication but the National Emergency Management Agency (NEMA) said the Federal Government is providing trucks of food items for the 30,000 newly displaced persons under the special intervention programme.

“This is a special intervention distribution occasioned by the influx of new IDPs from Baga in Kukawa Local Government and Kala/Balge Local Government,” NEMA director general, Mustapha Maihaja, told journalists on Thursday in the course of distributing food items, including bags of rice, beans, oil, tomatoes, vegetable oil, among others, to the IDPs. Represented by the Director of Search and Rescue who is also the Head of Special Intervention Team, Air Commodore Akigbe Iyamu, Maihaja said the distribution would continue on monthly basis. Perhaps, Zaharia may not have to worry how she would feed and breastfeed her child, having made successfully to a safe IDP camp.