When she climbed atop a car this week during a mass sit-in in Sudan, 22-year-old Alaa Salah aimed to rouse a crowd already intent on forcing the nation’s President to step down, she told CNN.

Salah is an Engineering and Architecture student at Sudan International University.

“I wanted to get (on the car) and speak to the people … speak against racism and tribalism in all its forms, which affects everyone across all walks of life,” the activist, who is also a journalist, said on phone.

“I wanted to speak on behalf of the youth. … I wanted to come out and say that Sudan is for all,” she added.

According to the Telegraph, Salah shows how women played a central role in the Sudan protests.

The Guardian newspaper added: …”the woman in white has become such a symbol in a country that has long known systematic repression of women by the state has surprised some observers.”

Just days later, her message has come to symbolize Sudan’s protests — and the prominent role Sudanese women are playing in it — thanks to a photo of Salah, clad in a white robe and gold moon earrings, that’s gone viral.

It was snapped as she stood Monday on the vehicle’s roof amid hundreds of protesters outside the presidential compound and army headquarters in Khartoum and chanted, as the throng responded, “Revolution!”

“Every time people responded with ‘Thawra’ (‘Revolution’), I would get more excited,” Salah said. “We need international support, for people to be aware of what’s happening and to understand our demands.”

In that moment, Salah was “representing all Sudanese women and girls and she inspired every woman and girl at the sit-in,” Lana Haroun, who snapped the image, told CNN. “She was telling the story of Sudanese women. … She was perfect.”

im searching for her

Salah was surprised by the viral reaction to the photos and videos, she told CNN. “I wasn’t expecting it at all,” she said. “I’m happy that (the video) made people pay more attention to the protests.”

The activist’s choice of attire has come to represent the protest movement in its own right.

“The white robe is a symbol of strength, purity and courage,” Salah said. “The women have a big role in these protests.”

One commentator, Hind Makki, said Salah’s gold moon earrings are traditional bridal jewelry and her entire outfit “is also a callback to the clothing worn by our mothers and grandmothers in the 1960s, 1970s and 1980s,” while demonstrating against previous military dictatorships.

“Sudanese everywhere are referring to female protestors as ‘Kandaka,’ which is the title given to the Nubian queens of ancient Sudan, whose gift to their descendants is a legacy of empowered women who fight hard for their country and their rights,” Makki added. 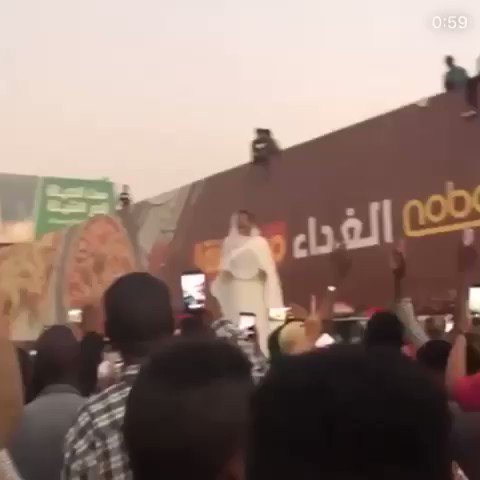 HER CHANT INSPIRED THE MASSES

Salah chanted these lines during Monday’s protest, as the crowd responded, “Thawra” (“Revolution”) after each line: